I think our arena is going to be perfect for getting Princess Fancy Pants started. Her paddock is just outside the covered arena so she can watch me work with Mac and Paddy. So far she's a bit nosy and likes to come to the shared gate between the two spaces and paw at that gate. So I just ride on over with my flag and shoosh her off. She gets to see me do ground work with Mac using the flag; she gets to watch while we walk, trot, and canter (and he's being great, by the way - not reacting when she kicks up her heels); and when I'm done, I'll go stand by her gate and swing a rope or a lunge line or the flag and let her see that Mac doesn't care and those things are no big deal. 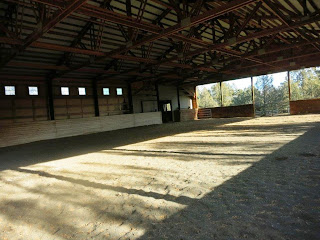 The other day I put a bit in her mouth (with the headstall) and put her halter on over it and we just walked around in the arena while she played with it in her mouth. Then I brought her back to her paddock and let her eat some hay with the bit in (I was holding her lead rope so she couldn't get the bit caught in anything).

I think I may try flagging her in the arena while I ride Mac next. Then after that I'll try ponying her.