The Pony and The Pink Umbrella

Yesterday was a good day of schooling, third day in a row of "work" for the pony. First day (Friday) was a trailer ride, and longer than usual. She was great!

Second day (Saturday) was a trail walk in the BLM and she was great!

Third day (Sunday) was work in the arena followed by some de-spooking work. I've decided to move forward with a different approach of working her in the bit since with the double lunging in the last bit she was getting her tongue over it. Since we're using a new bit, I thought I'd try a different approach so as to give her a good experience with it. We started with our short lunging warm-up and I just used the cavesson and headstall/bit (cavesson for lunging, bit for the next phase). She was very good and picked up the left lead canter on her own (with a little squeal beforehand) and I just let her canter since it was a good transition, she wasn't running around like a crazy pony, and she got the correct lead. We did just a little bit on each side and then I did the bit work.

For working the bit, I first asked for lateral flexions and I released at the slightest give to the bit. When that was nice and soft, we moved on to walking forward. My instinct is to walk closer to her than using the long lines right now, so I held a rein (regular reins, not long reins) in each hand and walked at her shoulder. All we did was walk and turn and stop. Oh, and I did have my dressage whip and I used that on the outside of the circle, like and outside leg, so that if I used the inside rein and she bulged out, I could follow it up with a gentle tap-tap of the "outside leg" to keep her straight. It worked really well! When we had a really good turn, I quit on that, put her back in her stall, groomed her, and then let her go out in her paddock for a little bit.

When I came back to let the horses out for lunch, I did a little de-spooking with a pink umbrella I bought just for this purpose. I went into her paddock (it it good sized at maybe 100 x 100, so she has room to move and get away if she's troubled) opened it and closed it far from her. She was pretty good with it until Mac spooked from afar, then she thought she should spook, too. Soon enough, though, curiosity won out and she came up to see what it was all about. Armed with cookies, I gave her a cookie for touching the closed umbrella. Then I opened it and she spooked and trotted away. But then she came back. Eventually, I could open and close it and she'd stand still but spook in place. Then I started walking with it and she followed me (lured by the promise of cookies) and eventually she followed me while I opened and closed it and she didn't run away and kept walking. Good pony! Finally, I wanted to get a picture of how cute she was so I got my phone and hung the umbrella in the tree and got these pictures. 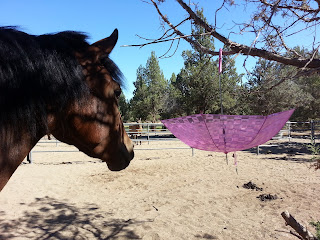 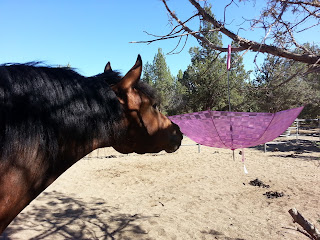 Her neck looks oddly shaped due to the angle, but I'm pretty sure you can see how cute she is no matter what!
Posted by Susan at 9:08 AM