Training on the trails

Princess Fancy Pants has been so good! The past couple times I've ridden her, she tells me she'd rather hit the trails than be in the arena. She tells me this by trying to stop by the gate that we go out to get to the trails in the back of the property. So yesterday that's what we did!

Well, first we did start with a little warmup inside the arena, just to make sure that we had some semblance of steering and brakes. Going to the right is her more difficult side in terms of bending and moving off that leg, so I thought that it would be nice to start working her on the trails so we'd have room to just go straight and not worry about always having a corner coming up. After our brief warmup, that's what we did.

We went out to the back trails and walked one loop, just to see what was going on at the neighbors' house behind us (not in a nosy sort of way, they just have kids who may or may not be playing back there, a tarp that may or may not be flapping in the wind, and a ninja shiba inu dog who comes running up to the fence without making a peep). It all seemed quiet and so on our second lap I picked up the trot. Pony liked working back there! She was very forward, took contact nicely, and was just fun to ride! After two laps of trot in one direction (with many transitions), we turned around to loop back the other way. We were trotting nicely along, and I could sense something to the right of us and sure enough, it was ninja dog running up to the fence. Pony and I stopped and said hello to the dog, then went back to work and trotted another lap and she was just so good that we ended on that.

I think that for canter work, that would be a better place to do it so she can just go forward. That's what I did with Mac when I was getting him going, and I think having trails and a nice open space to canter are really good for young horses who are just learning their balance.

And since she's just so beautiful, here is a picture of her from Saturday afternoon . . . with her boyfriend hanging out with her on the other side of the fence. 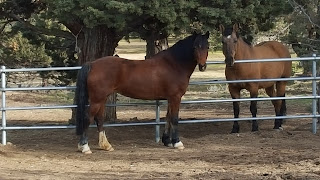