Cows on the trail ride!

I had a lesson with Princess Fancy Pants on Tuesday where we worked on ground work and getting her to focus on me, so I did a bit of that before my trail ride on Friday. Since I don't have a round pen, I fashioned one in the arena by putting up cavaletti and jump standards in a line so they formed a barrier. Granted, she could have jumped over it, but she didn't. One part of me would love to buy a proper round pen, but the other part of me doesn't want to spend the money; and, I've gotten thus far with her without it that I'm not sure it is really necessary.

We went for the long loop and this would be the second time she's done that loop. We walked and trotted and I gave her an opportunity to stop at the water and have a little grass and bite to eat. If she put her foot in the water, great, but my plan was to just get close to it. No dice on going in the water, but she did inch very close and have some grass.

So off we went again to the end where we'd turn across to get to the other main trail that would loop us back home. I knew there would be cows there because I had taken Mac there the day before and they were out. Sure enough, they were there and there were lots of them! 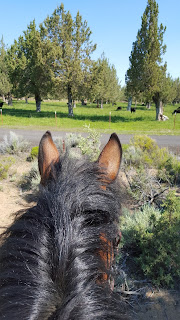 She was so interested! If there were no fencing separating us, I'm sure she would have wanted to go closer still. I was hoping our neighbor would get cows again this year but I don't think he is, as it seems everyone who is getting cows have them by now. Oh well. At least we can see some if we hit the trails!
Posted by Susan at 8:47 AM