Over the weekend, I decided to do some tarp work. I put the tarp away from the edge of the arena such that there was a big lane between the tarp and the arena wall. I stood on the tarp so it made noise. I had the pony walk on a circle between the tarp and the wall. That was fine, so I made the lane smaller and did it again. And then smaller still. We got it to the point where it was just wide enough for her to pass through without her feet touching the tarp and then it was a bit scary. I had her walk through and let the long lead drag on the tarp - SCARY!!!! We worked on that enough, though, that it didn't seem to bother her anymore. Then I'd have her walk through the lane and stop between the tarp and the wall. At first she stopped before the lane. Then she'd stop right after the lane. When she stopped in the middle (both directions) and stood quietly, I called it a day.

When I got on Mac next, I decided to move the tarp so that it was in front of the gate that goes to Pony's paddock (where she likes to stand when I work Mac). Mac is so not bothered by the tarp, so we walked over it so Pony could watch. Then Mac helped me out by just standing there and picking up the tarp and flapping it all over the place. While I think it was good for Pony to watch and see that, she was not interested in being close to Mac for that exercises.

So yesterday I trailered out Pony for a lesson and we worked on the tarp again. This time with a long strip attached to a stick. Trainer walked with it dragging on the ground. 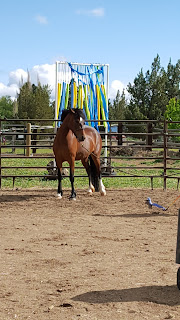 Sometimes Pony was fine, sometimes she wasn't, so she just kept working calmly and quietly until it was no big deal and trainer could rub her all over with it (except face and feet, she still wasn't happy with that).

She got a bigger piece of tarp and did the same thing. I had a bunch of cookies with me so trainer tried to see if Pony would be interested in the tarp if there were a cookie wrapped in it. At first she was not interested, but then she was. 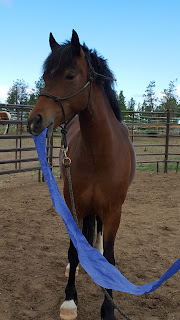 That seemed to really help, because after that, trainer could rub her face with it and she was okay.

We did just a little more with it whereby we left the tarp on the ground and we were chatting and Pony picked it up and nibbled on it herself (instead of it being rubbed around her mouth with a cookie wrapped inside). I had my clicker with me, so each time she did that she got a reward.

With that great progress, we called it a day!
Posted by Susan at 7:54 AM