Princess Fancy Pants is officially four years old! We celebrated by her getting a pedicure. And grazing, which makes for a happy pony . . . .well, three happy ponies! 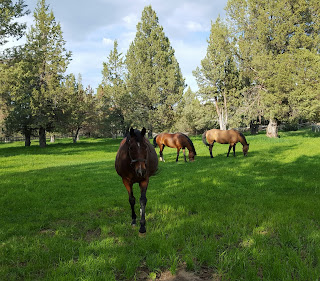 I think I may have thwarted her pawing a bit. I've been grooming her in the cross-ties more, but I do keep her lead rope clipped to her halter. Just the other day as she was pawing and I was gathering up the lead rope, she got her foot over it (I actually have worked with her with ropes around her legs so she is used to that and doesn't freak out). I just went with it and threw the rest of the rope over her withers, so it went through her front legs and up and over her off-side shoulder. Every time she pawed, I didn't say anything (no growling or "knock it off" to her) - I just gave the rope a little pull so that she would feel it under her right front leg. It was as if the correction wasn't coming from me, the rope was just the result of something SHE did. When she stood still, there was no pressure. When she pawed, there was pressure. It worked really well, and her pawing diminished in duration greatly - yay for self-correction (as far as she knew)!

We then tacked up and headed out for a Big Girl Trail Ride in the BLM. This was her first long trail ride where we did the "Boneyard Loop" as I like to call it (due to the plethora of bones there - yikes?). This is a ride I do regularly with Mac, but for Pony it was her longest ride yet. We did walking and trotting and transitions back and forth. It is a great loop to ride because it is a long rectangle, a little less than a mile long on each long side, and the short sides are short. On either side going both ways is a ditch with irrigation water, so depending on the flow and where you are, it can be loud or quiet - AND there can be ducks that fly up seemingly out of nowhere! We can go nice and straight for a long time and work on, well, just going straight!

At one point she did spook at a pine cone falling out of a tree and hitting every branch on the way down, but her spook was sort of zig-zagging in place because she couldn't figure out what the noise was and what it was. No biggie, she handled it like a brave pony and we kept on going after some pats and deep breaths!

We also worked on circles around sage brush and picking our way through some trees and brush in an area that has some old junk on the ground.

It was a great ride! Now that she's four, I'll step up her work a bit - longer trail rides and/or more frequent under-saddle work - probably 3 rides per week. This ride was the first time I got on her since coming back from vacation (so about two weeks, as before I go and after I come back there's stuff I need to catch up on). I didn't lunge her first or do any ground work other than walking down to the BLM and having her mind me. She stood stock still for mounting, didn't call to her friends or refuse to head out on the trail.

We've had some rain this weekend (well, all weekend, actually!) so we did some ground work in the arena yesterday with the tarp, and I had a short ride in the indoor today, working on circles and keeping their shape and going forward. Short but sweet at about 20 minutes of walk and trot.

The horses are all out in the pasture right now and I've upped their hours to pretty much all day. I am getting grazing muzzles for them, though, so they don't get too FAT!
Posted by Susan at 4:34 PM