The arena had all sorts of toys to play with - two tie lines hanging from the ceiling, a sled for dragging around, a "car wash" thing extended from the wall with straps that you could pull/tie back to make an opening for the horses to walk through, the aforementioned bridge. On this day I decided to play with the "car wash" thing. I just worked on foot with this to start, riding through it would come later. I tied back one side so that half of the car wash fingers were hanging straight down, and then there was an opening where the others were tied back. I asked her to walk through. At first she rushed and trotted through, but she got praise and breaks for trying. We'd go back and forth a few times - going through, and then taking a break. When she got quieter about it and walked through, I called it quits.

I took some time in the afternoon to practice the tarp technique in the round pen. The clinician was on horseback when he did it, and I was on foot, so I had to be fast and have good timing about how I did it. Basically, I laid the tarp out and made an alley between it and the round pen wall. The tarp became the resting place, and anywhere else was somewhere she had to work. It was all up to her how much work she wanted to do. As long as she considered the tarp (at first looking at it, then getting closer to it, then stretching down to look at it or sniff it), she would get a break. Otherwise, it was time to go to work. She caught on pretty quickly and so would go up to it and drop her head and stand and look at it. So the next thing was to ask her to go in the alley between the tarp and the wall. She caught on and would do it, but she'd rush through at the trot. All during this, she got breaks (reward) for considering it more and more. Eventually, she would walk through the alley calmly. I didn't feel confident enough in my abilities to get to the next step (going over the tarp) without screwing up, so when we had something good, I called it a day.

I took the opportunity to tie her to one of the hanging ropes, which was no big deal and she was really good about standing there and not pawing and having horses work around her. 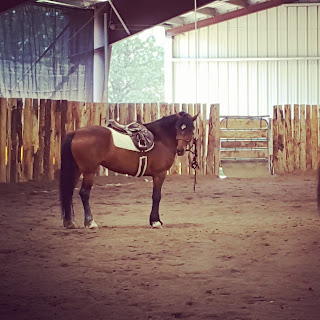