On day 4 I asked for more help with the tarp in the round pen, as I had done what I felt confident doing on my own. I told him how far I was able to get the previous day but that I wanted help with the actual going-over-the-tarp part. Since he was horseback - and the clinician - I thought he would be better suited to knowing when to push and when to say it was enough for the day and his timing and tools are of course better than mine. He started out with the alley way again, but we soon closed that up. He put on pressure whenever she was away from the tarp and when she got to the tarp, he released the pressure . . . but he would add just a little movement with his flag to try to entice her to go over.

Here she is considering the tarp while he puts a little pressure on her with his horse and the flag. 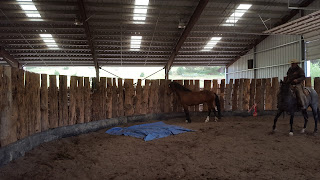 Then she got to the point where she'd trot over it.

And then eventually, with help from another guy (I didn't want to get run over in case she tried to jump over the person on the lead rope!), she walked over it. 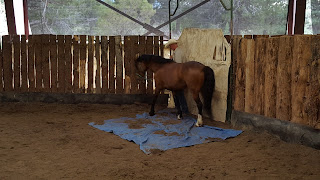 And then she stood on it! 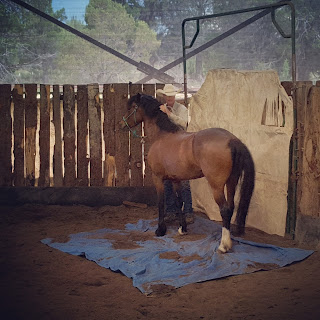 Oh, and I forgot to mention another thing that the clinician emphasized:COMPROMISE! "Do my thing, your way" - if you want the horse to go forward over there, but they are scared to go over there, just get them to go forward wherever they feel comfortable going. In the case with the pony, he said that sometimes the tarp is scary, but is less scary if you scoop and scatter some dirt or sand on it, so the helper guy put some sand all over it and that seemed to help her.

After that it was all praise and scratches and pats and loves and a really good roll!