I got home on Tuesday from taking Princess Fancy Pants on her first big outing away from home. Since I keep my horses at home and always ride alone, one of the things I was worried about for the future was how it would go when I took her to her first show or outing where there would be lots of activity, so I decided a great place to start would be to a clinic that wasn't too busy but where she would get exposed to all sorts of things that are new and different for her. It was also a fun girls' week trip to catch up with my old riding buddies from CA - one has a green mare Pony's age and wanted to get her going more, and the other has a BTDT gelding who could be a steady-eddy companion. The two of us with the mares decided to do the colt-starting class so we could see where we stood and what else we should be working on.

My goals for the clinic were: get Pony out and about and exposed to a new place where she'd have to be in a paddock next to other horses, work on exposing her to new things, get over The Tarp issue that we've had, learn where other holes may be and how to address them, ride in a group situation, and if I was lucky, to introduce her to cows.

The clinic was split into two groups - mornings for colt starting, and afternoons for the others. Basically the young horses would go to the arena in the morning and we'd get help with whatever we asked for. There were two long ropes hanging from the rafters where we could work on tying and leaving the horses; there was a round pen in one corner, and then a sort-of waiting area that was fenced off where we could do other ground work or work on going over a bridge that was set up there.

On day 1 we did some ground work and I worked on some flagging (after finding the great trainer here to work with and taking his advice on working on flagging her more, I changed my flag to a big piece of cut-up tarp because it is noisier and she would pay more attention to it than the other flag), paying attention while leading (going and/or stopping with my feet and staying at a certain "spot" with me - I never really thought she was bad at this, but the trainer pointed out that she wasn't stopping her feet with mine and paying attention when being led), and then I asked for help with the tarp. One thing that the clinician said was "preparation is more important than execution" - meaning, take your time to set it up so that your horse will be successful. It isn't about MAKING her go over the tarp NOW, but setting it up so that she will want to go over the tarp and seek relief there (eventually). Another thing related to that that he worked on was getting the horse to CONSIDER [the thing] - you've got to get the mind first. So at first he wanted her to consider the tarp. Look at it, turn your attention to it, and you will get relief/release from it (taking it away as a release, or taking her away from it). I had been working on this with her at home, so she was familiar with that concept and has learned how to be curious about it . . . but not so much that she would step on it or go over it. The goal for the first day wasn't to get her over the tarp, it was to get her more comfortable with it and it being around and it being near her, on her, other horses walking on it, etc., and then to know that she'll be rewarded for considering it.

Here she is with it in her space. 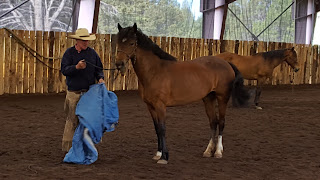 Here she is with it on her. 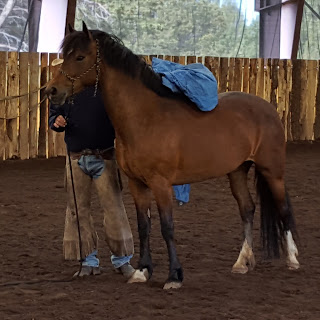 Here she is getting a break and checking in on how some other horses were doing in the round pen. The clinician gave really big breaks disguised as checking on other horses or telling stories, but it was really the release/"soaking" time for the horse to think about what just happened. 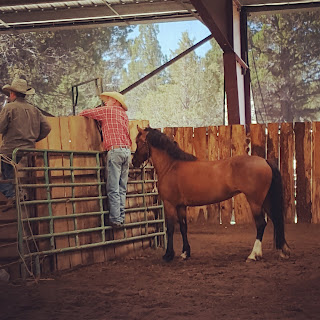 He tried getting her to walk over just a corner of it, but she would not have it, so once it was spread out on the ground and she just considered it, it was enough for the day - there would be plenty more opportunities to work on it.

Since she's usually in a pasture at home and here she was just in a small pen, I got her out in the afternoon as well. I just got on and walked her around for a bit. If she wanted to be near other horses, I gave her the opportunity to go to work in their presence and then go somewhere else to rest. She caught on pretty quickly to that one! Once she stood quietly on her own with her neck relaxed and paying others no mind, I got off and took her back to her paddock. She was really good about leaving the group and going back to the paddocks with me.