I interrupted the love fest to do a little ground work with her. I brought out my orange flag and she was interested but wary of it at the same time. She followed me as I dragged it on the ground behind me, but she also yielded away from it as I brought it up and directed her energy to move around (just walking, no crazy pony chasing). She's very good with her responsiveness and is easy to work with. I stood and petted her while holding the flag close to her nose so she could smell it and put it in her mouth and just have it waving in the wind a bit in front of her. Then I touched her back with it and she tensed up but didn't make any moves to get out of dodge. This was all at liberty. I then put her halter on and stood a few feet away from her and in front of her, and just circled the flag from my left side to my right side repeatedly. I didn't put any energy into it, I just was moving it. And she just stood there, which is what I wanted. She was a little tense, but again she didn't do anything. As soon as she gave me a lick/chew, I stopped. We repeated that a couple times.

Then I took the cotton lead rope of her halter and swung it over her back a few times, just letting it land on her. Next I swung it over her back and caught it around her belly like a girth and gave it a little tightening sort of feeling. Then I moved it back toward her flank and did the same thing. Then I circled the rope around each leg, just swinging and letting it catch the leg. Then I took each end of the rope and sort of shimmied it up and down each leg, ending around the fetlock and gently pulled until she gave to the pressure and lifted her leg. She was a great pony all around for all of that work and stood very quietly while Paddy watched. I gave her scratches all over, and especially at her belly button, which she loves, and went up to the barn.

Colin brought the tractor up to the barn to help me with Dolly's stall mat, because this morning when I went out to feed, one of the stall mats was outside! And not just outside like draped over the doorjamb or anything. It was OUTSIDE. Outside across the doorjamb, across her little patio, and in the dirt. And her stall didn't even look like anything had happened - there were shavings where the stall mat had been! It was like one of those things where you see someone pull a tablecloth off a table and leave all the place settings in situ!

Here's the inside of the stall. 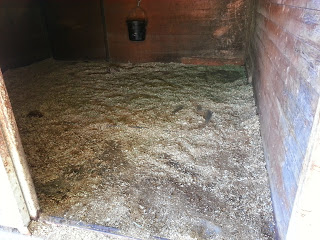 And from outside the stall. You can see the doorway of the stall, the "patio" and where the mat ended up. I have no idea how she did that! 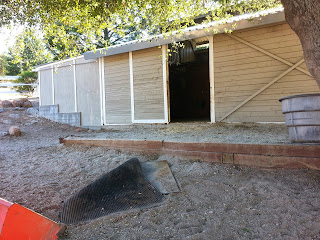