Do you see a theme here? 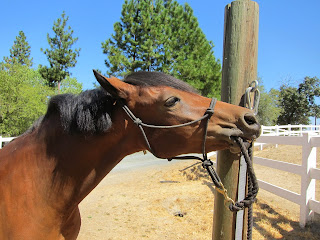 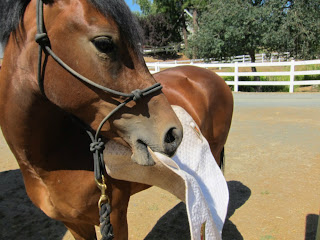 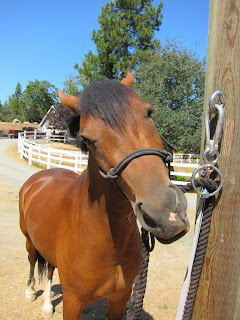 Are all two-year-olds so mouthy?

Princess Fancy Pants is coming along nicely. I enjoy working with her and understanding how she learns - I find her to be very sensitive with a willing attitude. We continue to do work with the flag and have progressed to doing figure eights, which she caught on to right away. One thing that I thought was solved but wasn't was the fly spray issue.

Apparently, putting on fly spray while standing in the barn is okay. Putting on fly spray while standing in the pasture is NOT okay. I took my grooming box out one day and had her halter on for good measure and groomed her and then went to put fly spray on and she said No effin way! So I quit the fly spray attempt because we weren't getting anywhere because she kept blocking me and backing up and not letting me get to her side. So I got the flag and we did some flag work with getting her to follow a feel - if I open my hand to my left, you follow it and track left. That's all. It didn't take her long to respond to just a lifting of the flag - you really don't have to get loud with her, she tries and gets it right away. So we did that for a little bit - just signaling with the lead rope and a gentle lift of the flag and as soon as she'd move in the right direction I'd drop the flag. Then lots of praise and scratching with the flag and shooing flies with the flag and standing quietly to think while (I dropped the flag) getting more scratches all over.

Then it was time to go back to the fly spray. I got out a brush, stood next to her with the fly spray, sprayed the brush and then brushed it on her. I started at the neck, then did the front legs, then the back, and by the time I got to the belly and butt she'd let me spray her directly. Moved on to the other side and I could spray her directly there, too. Silly pony!

I've trimmed her feet, we went for a walk all the way down the ditch, and today I played with putting a saddle pad and lunging surcingle on her (not for the purpose of actual lunging, just to put something on her back and have her walk around with it on). I started in the grooming area by putting the pad on her back and letting her stand there and I'd rub her back over the pad. 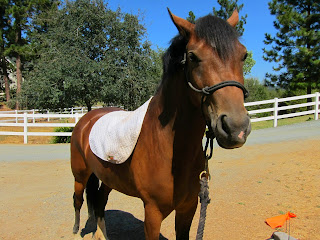 Oh, and Mac was on the other side of the fence making googly eyes at her. 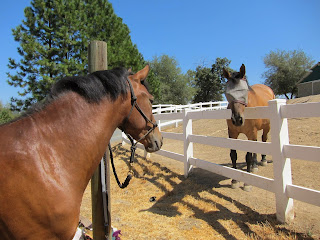 I decided that it would be best if we were in an enclosed area and away from the other horses so we went to the arena. I rubbed the pad all over her, tossed it at her, put it high on her neck, on her back, on her loin, on her butt. It was kind of windy, so it was perfect to put it on her, walk her around, let the wind pick it up and have it fall off and/or have it slide down her back toward her rump. She's trot away from it a bit but then stop and look at it. Of course she walked over to it and bit it and picked it up off the ground and walked around with it. Why won't she do that with the Jolly Ball I bought for her!?

So I put the surcingle on and walked a lap, stopped and scratched her all over. I tightened it one hole (not too tight, just snug enough to be stable), walked a lap leading her from each side (with stops for scratches after each lap) and called it a day. We came back to the tie area to untack and get her big reward. 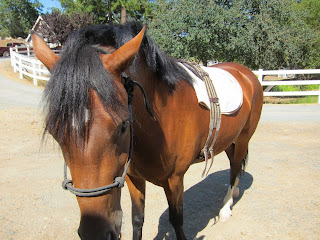 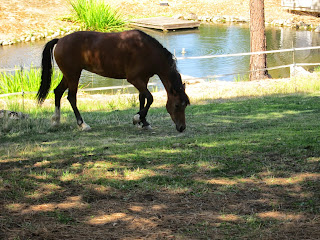 Princess Fancy Pants is hard to get a good picture of because 1) I'm trying to do them myself and she's very curious and wants to know what I'm up to so I mostly get extreme close-ups, 2) she's always trying to get her mouth on something, and 3) that something includes grass so I fear any pictures I get of her in the pasture will be with her head down!

But she's cute. Trust me.