She calls and the boys come running!

So much to update, but I'll do a little at a time.

Over the past couple months we worked on putting up another drylot area behind the house. It is now probably one of my favorite things about this place! I can stand in the kitchen window, or sit on the couch, and look outside and see the horses practically in the back yard! 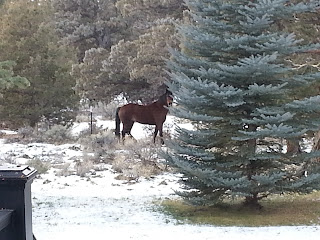 Today the horses were out there and as I was reading in the kitchen, I heard Princess Fancy Pants whinny. She doesn't do that a lot, so I went to the kitchen window to see what the fuss was about, and the boys came running to her. I don't know if she was just saying, "Hey, where are you guys?" or "Look out! There's something beyond the fence!" but either way, they came a-runnin'! It was pretty cute.

Here's a picture of her walking around at lunchtime. Exciting, I know, but she's just so darn cute! 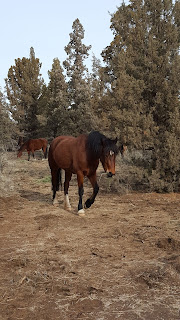 Pony has had a lot of time off because it has been pretty cold and my motivation goes way down when it is cold outside. But now we're having spring-like weather, and wouldn't you know I have appointments all week so I'm not able to ride. Hopefully this weekend.

The last time I did ride her, though, I worked on getting more forward and she was all for it. I feel like we're on the verge of cantering (I only just did the 12th ride on her) under saddle. We'll see how brave I am, 'cause she does have a good buck in her (at least on the lunge line)!

I'm working through an injury, but my goal is once spring rolls around to get her in a regular program of riding 3x/week - maybe 2 schools and 1 hack on the trails, we'll see.