The vet came on Wednesday to take Pony's stitches out and she got the okay for turnout - yay! I'm not turning her out with the other horses, but she does get to go in her own paddock. Since she and Paddy get along well, she can go out when Paddy is out of his paddock. At night, when Mac goes out, she goes back in her stall for lockdown (well, she can put her head out the dutch door). 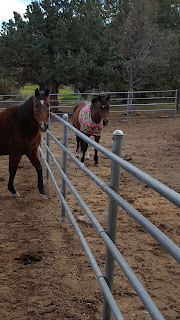 Princess Fancy Pants has been very good for her turnout. For the first two days, I did it for breakfast only. She never got up to any hijinx (that I could see, anyway) and was very calm and well-behaved. Now she goes out all day and comes in for dinner and overnight.

When the stitches came out, the vet said it looked very good and that it is healing well. It looks gross to me still, but I'm not a vet so I take her word for it. I didn't get a picture of it today, but it looks so much better than just three days ago, so she's continually improving. Part of it just can't be stitched up, so the skin will have to fill in and grow together - this is how it looked on Wednesday. 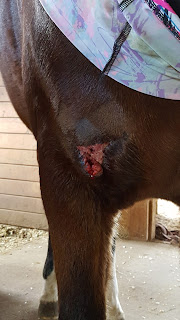 PFP doesn't seem to be favoring that leg so that's good news. I did buy her another sleazy because the first one got bloody, even though I put a maxi pad over the wound. I think she was fussing with it a lot. For the new sleazy, I bought a roll of non-stick batting (I'm sure it has another name but it escapes me right now) and so I'm cutting a big square of batting and then safety-pinning it under the sleazy. When I took it off to change it this morning it was appropriately bloody and the sleazy was mostly clean, so I think this is a better solution.

I guess the best thing to come of this is that for all the doctoring I'm doing with her in the barn aisle, she's getting much better about standing quietly in the cross ties!
Posted by Susan at 5:54 PM 1 comment:

Poor Pony has been stuck in her stall for almost two weeks now. Even though I clean her stall every day (four times a day), her feet are a mess because she pees so much, and pretty much all over her stall, and of course she poops and she is standing in there all day on stall rest. I take her out once or twice a day and tie her up to clean her stall and groom her and tend to her wound, but her legs are stocked up and her feet are in need of drying out!

Her wound is healing up well. I ended up getting a sleazy to put on her to cover it. I put the sleazy on, then put a maxi-pad over the wound, then I safety-pin the maxi pad to the sleazy so it stays in place. It helps a little bit with the drainage and to also have something soft over the wound. At first I just stuck the maxi-pad there but they kept falling out so I moved on to safety pins.

The vet has come out a couple times to clean it and re-do the stitches a bit. The top part of the stitches healed well and right away - it is just the bottom part (distal) that is taking longer to heal. It looks gross to me, but the vet said it is on track and looking good so I'll take her word for it!

I thought Pony would appreciate some fresh air for a change, so I tied her out with her hay bag for breakfast while I did my morning chores. You can see how beautiful she looks in her sleazy! 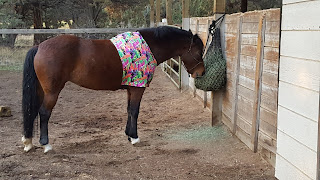 I worry about the stocking up in her legs and her getting fat (I pretty much keep hay in front of her all the time so she'll be occupied and won't lick at her wound), but first things first - the wound needs to heal. After that, then we'll start a rehab program and take it from there.
Posted by Susan at 8:27 AM 1 comment:

I was planning on giving Pony the winter off of riding (we'd still do trail hand walks or long-lining as I could stand it in the cold weather), but she had to go ahead and get herself an early vacation time by injuring herself.

We went on vacation to Hawaii and our farm sitter did an amazing job as always. I was hoping to make it to a h/j schooling show on Saturday, but after getting back at 1 am Thursday morning and being still on Hawaii time, and having a bunch of winterization projects to do before Colin has knee surgery, I cancelled.

Now I wish I had sucked it up and gone because if I had then Pony would not have gotten herself into such a mess.

It rained a lot while we were gone and for a couple days after we got back. The horses had only been out singly while we were gone because I didn't want the house sitter to have to deal with all the horses running around together. I put them out on Saturday for lunch together. I can imagine what happened, knowing each of the horses. First, there had been running around such that the horses banged on the fenceline from inside their paddocks. The line between Paddy's and Pony's paddock had gotten bumped enough that the metal post bent outward. In doing so, the caps over the pipes were either knocked off or pushed inside the pipes such that there was now metal exposed. Something happened to make Pony either run into that directly, or swing herself around (a la pirouette) and slice her pectoral muscle. I did not see this happen, but it is my best guess.

Originally I actually thought she ran into a tree branch or something, and when Colin was scouting the paddocks to see if he could find the culprit, that's when he found pony hair there and told me that he suspected that was the source of her injury.

In any event, when I went out in the afternoon to gather the horses (because I was going to lunge Mac and/or Pony to see how everyone is feeling), I saw Pony standing funny. And then limping. And then I saw the wound. Ugh. Yuck. Cry. I put in an emergency call to the vet right away and went about getting Pony into her stall. She would not walk. She would not budge despite my efforts at leading her. So I left her where she was, grabbed a feed bucket and put pellets in it and walked out to her. Of course she would be motivated by food! She slowly ambled her way into her stall and ate her pellets. Colin came out to help me with chores so I could wait by the phone for the vet to call back. We closed her in her stall and waited. I sat in front of her stall and cried.

The vet came out and administered a sedative, cleaned her up, stitched her up, and left me with after care instructions to keep her in her stall and my regular vet would come out on Monday for a re-check. 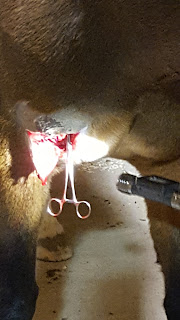 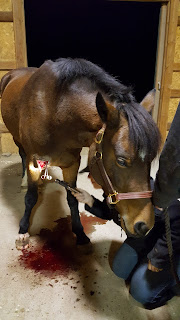 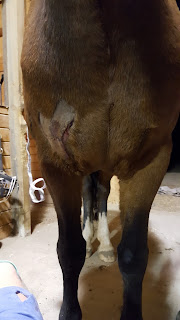 The on-call vet and my regular vet did Face Time to consult and see how bad it was. The vet could not feel bone when she put her finger into the wound - that was good news. There was a flap of muscle that had to be cut off as it couldn't be sewn back together - that was bad news. Pony was a perfect patient throughout it all.

On Sunday she was in much better spirits and perkier. Yesterday (Monday), she was perkier still. I took her out of her stall and put her in the covered arena so I could do a good stall cleaning for her. She was walking MUCH better, much, much better! She was happy and sweet. After I cleaned her stall, I put her in the cross ties so I could groom her for the vet's follow-up appointment. I wiped the Vaseline and drainage goo off her leg so the vet would be able to get a good look at it, I brushed her mane and tail and of course the rest of her body. She tried pawing a little bit with the ouchy leg, but thought better of it and switched legs to paw. At least she's got her personality back!

Vet said continued stall rest for two weeks until the stitches come out. I can hand walk her for maybe 10 minutes a day (think I'll just start with one lap around the arena a couple times a day). Banamine protocol ends tonight. She'll be on antibiotics for 10 days. Her poops look good (she's on a probiotic because of the antibiotic), she's eating and drinking normally, she's bright and alert, her TPR (temperature, pulse, respiration) are normal, there's no heat or swelling or stink or sign of infection at the wound. The vet did back out the stitches just a bit to change where the drainage would go.

Pony has been a perfect patient . . . well, except she doesn't like her Banamine! She is happy, doesn't seem overly annoyed at being in her stall, and she's not acting naughty or anything like that. I'm sure it helps that her brother Paddy sticks his nose in the open stall window (not hers, the one next to her that is empty of horse but which we use for storing shavings and stuff) and she can touch his nose from her stall (stalls are separated by half-walls with grills, doors to outside are dutch doors, so while the stall itself is not accessible to the horses, Paddy can stick his nose through the open dutch door top to check on her).

So that was NOT the kind of vacation I was planning for Princess Fancy Pants. Vet thought she should heal up just fine with no gait abnormalities as a result. She's already walking better so we'll just follow doctor's orders to facilitate healing.

I'll say this, though. No more joint turnout with Mac. He's the troublemaker and it just trickles down. Paddy and Pony can go out together, but Mac will have his own dry lot pasture (which I've been busy pulling weeds in to re-set-it-up for him). Oh, and Colin went straight to work repairing the fence so that those posts are covered again. Gah!
Posted by Susan at 9:55 AM 1 comment: