I'll just get to the good stuff first:

On Saturday I was supposed to go take Princess Fancy Pants to my friend's ranch for a visit. The logistics didn't work out because it was to be a very hot weekend (and it was so I'm glad I didn't go, although I missed the fun) and I had to make a decision early enough to cancel the house sitter. So I got out for an early ride and decided - what the heck? Colin's at a bike race, I'm here by myself, what better idea than to jump the pony for the first time?

I deployed her tying skills and tacked her up and left her tied in her stall while I went and set up the exercise. I went on the trail out back because it is shady back there in the trees. I picked a nice path that was flat and had good footing, was a little in the shade (actually a mental exercise for the horse to go from light to shade to light) and had trees on each side so if I pointed her at the jump she couldn't go around it.

First I set up two jump standards and three poles. The poles were set so that there were two poles set at a trot stride. Then there's a trot stride with no pole (when I put up the jump that defines the take-off space), and then a ground-line pole is set up between the standards. The ground-line pole also helps the pony decide where to take off for the jump. When I get to jumping, all those poles will still be there, and a cross rail pole (looks like an X if you are headed toward it - the horse jumps over the lower part which is in the middle) will be added one at a time.

Pony was so good! We worked on it in a progressive way. First by walking through the poles, then by trotting them, and then going the other way just for fun (although I'd only do the jump one way). Then I put up one side of the cross rail and went over that and she did a little jump - it was so fun! I did't know what to expect - if she'd try to go over the low side of the pole versus jumping over the middle part where she's supposed to - or if she'd try to stop or duck out or what. But she was totally game and went right over the middle of it! We did that twice and then I put up the other side of the cross rail so that it was an "x" and rode over that and again she was great! We did that twice and then called it a day.

In between all of the pole/jump (if you can call it that, it was so tiny!) work we rode around my trails/track and did some walk, trot, and canter, and staring bug-eyed at the neighbors playing soccer in their back yard. So she got a full workout, the video just shows two minutes of pole and jump introduction.

I'll probably add little exercises like that into her routine once a week. So Tuesday, hack; Thursday, lesson; Saturday, hack/jump; Sunday, trail ride. A good schedule for a young girl, I think.

Well, golly gee willickers! Pony has learned how to open a gate!

The past few weeks I've thought maybe I'm losing my mind as I would come out to the barn after having let all the horses into the sacrifice area for breakfast and have subsequently found them back in Mac's stall/paddock with the back gate open! At first I thought I maybe forgot to latch the gate. Then it happened when Colin was on breakfast duty. And then again and again and again. I wanted to see who was doing it before I went to chain the gates closed, and this morning I got a chance to see it.

Turns out Pony has learned how to open the gate! I don't know what/when/why/how she learned, but she did. Funny thing is that she hasn't done this to let herself OUT of her paddock at night, but to let herself IN to Mac's paddock after breakfast. And everyone follows her!

After having so much fun in my dressage lesson I thought maybe I could think ahead to a little schooling show and do Intro with Pony. So I looked up the tests online and memorized Intro A - a short little walk/trot test. This would be good practice for me to work on geometry and timing. I think Pony is in heat today because she wasn't interested in being forward and her trot strides felt a little shorter than usual. But we did a couple practice runs and then called it a day and walked on the trails out back.

A little wobbly in places, but not bad for first efforts! I do need to get some cones or markers for the letters, as I just went by an approximation of where I remember them to be.
Posted by Susan at 5:07 PM No comments:

Pony and I had our first official dressage lesson today! We trailered out to a new place where we haven't been before. Pony loaded on the trailer like a champ and hauled perfectly. When she got off the trailer she was a little looky, but I remembered my last lesson with Charley and got her attention such that I could tack her up without tying her to the trailer. I left her halter on and took her bridle and went into the covered arena.

We did a bit of our standard ground work so that I could get her attention and focus on me instead of being a looky-loo all around. After a few minutes, I put her bridle on and went to the mounting block. She was a little wiggly so it took a couple passes before she was ready to stand for mounting, but we got it done. We walked off and got to work.

We started with some spirals in and out at the walk and changing direction. There were two other horses in the arena who were working, so she was a little distracted, but she wasn't naughty. I just focused on keeping her bent in the direction of the circle, keeping her forward, and keeping my hands soft.

I can't remember if it was when we were walking or started trotting, but when a horse came in to the arena she let out a squeal and a little hop. I laughed and told the trainer that she likes boys so she was probably distracted by the boy. Trainer said, well that's a stallion and he likes the ladies. Great. Actually, she was pretty good about it. After the initial squeal, she did try to trot faster when going in his direction and slower going away from him (we were on opposite ends of the arena), so it gave us a good chance to work on tempo and direction. We did lots of trot circles, transitions back and forth between walk and trot, change of direction, and we also went down the long side (using half of the arena) so she could move out a bit more.

She was nice and forward and soft in my hand and she's starting to seek the contact and go lightly on the bit.

We gave cantering a try and did get a trot-canter transition in each direction, but the left was harder than the right. We only cantered for a half circle or so, but we did get it done.

Pony got lots of compliments on how cute she is - of course! She handled all the commotion very well - people and horses coming and going, working around a stallion (!), dogs running about outside, etc. It was a great first outing to this new place! In the end she didn't want to leave so we had a little discussion about paying attention and getting on the trailer, but it wasn't a big deal. She hauled nicely home and when we got there I tied her to the trailer for five minutes and then put her in her pasture for lunch. 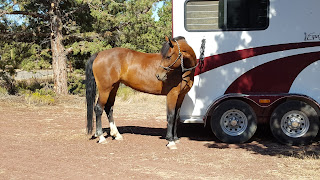 We're going to go for weekly lessons. It was a lot of fun!
Posted by Susan at 6:17 PM No comments: