Well I haven't posted in a while and there's not too much exciting stuff going on, but I do have a few updates.

Let's see - last I wrote I think that I had just gotten the hay nets and everyone had figured out how to use them. PFP was especially adept at getting hay out very quickly so I had to order her nets with smaller holes.

I switched their turnout arrangements so that PFP is now with Paddy all day long and in her own stall/paddock at night. Mac is now spending his days across the driveway. I think this works out because Mac generally isn't very nice to Paddy and they don't buddy up together so I don't think Mac minds being alone. Paddy gets to be the boss over someone (PFP) and he's a good boss who doesn't abuse his power. And because he's an all-around good guy and kind and gentle horse, he's a good horse for PFP to spend time with. I have been putting Paddy and PFP in the pasture in the afternoon while I do poo chores and I've been letting Mac have paddock-next-door access to PFP. I think her feminine charm is starting to wear off. At first he was very interested, then the more time he spent near her, the less interested he became, although she still tries to flirt with them. Now they play sniff-nose-bitey-face over the fence but there's limited romance going on, so that's a big improvement!

I think/hope I found out why PFP was having trouble trailering. The head divider in the trailer was swinging around (it should be stable but the spring that kept is stable has worn out so if there's commotion it comes undone). I've since taken the head divider out and have loaded up PFP just fine. Haven't taken her on a ride yet but if the weather holds up I'll do it this week.

We just got back from vacation and by the looks of the pastures we got a lot of rain while we were gone. We love our farm sitter, she's the best! The horses, dogs, and cats were well taken care of. Since there's no rain today and it is sunny, I put everyone out in their respective places. As I was walking along the driveway, Paddy and PFP looked so cute I had to take their picture. 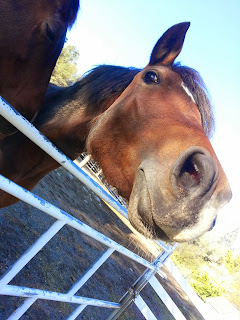 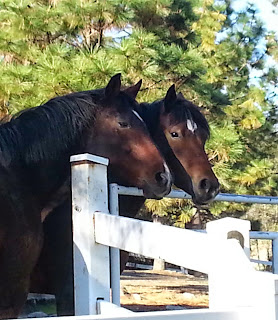