While we're working on getting the irrigated pastures to have underground lines (instead of hand lines that we have to move around), we made a Horse Guard dry lot pasture for the horses to go out in so we can keep them off the grass. 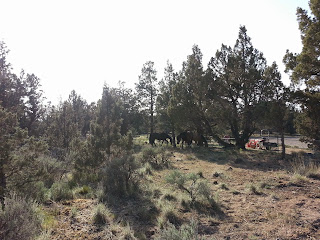 It took about three weeks to get this done. I wish I had before and after pictures, but I wasn't clever enough to do that. Basically, all of the juniper trees had lower limbs on them that needed to be chainsawed off - that was Colin's job. Then I stacked them by the edge of the pasture and we had someone come pick them up. But he was sick so had to postpone and do it in a couple of trips. Then I did all the post bamming by myself (that's a technical term, of course) - t-posts in the four corners, fiberglass posts on all the sides, with t-posts then spaced after every 5-6 fiberglass posts. It is hard to get a straight line because sometimes I'd hit rock and have to move a few inches this way or that to get the post in the ground. Then we put the insulators on and ran the tape and hooked up the charger, and ta-da! A new pasture!

There were some native grasses in there that didn't last long. We hang hay nets from the tree limbs so they have something to eat while they are out there; and of course there's a water trough. Supposedly the neighbor brings in cows for the summertime, so that should be interesting (this pasture borders our shared property line)!

In other news, Princess Fancy Pants let me rub a square of tarp all over her while standing quietly so the next move is to cut off a bigger piece of tarp and play with that! I also ponied her on a short trail ride in the back. At first she was nice and quiet but heading back to the barn she had a little more energy, so we had to go back out and come back a few times as well as go back to the indoor and keep working, so she wouldn't learn that bouncing around = going home and chilling with your friends whenever you want to.