And it was a doozy!

We've been watching the weather forecast, as we were supposed to have a friend come up for Thanksgiving. She was going to drive up yesterday, but the forecast called for a couple inches of snow. In and of itself, a couple of inches of snow isn't bad, but she'd have to pass over Mount Shasta, go through Weed, and then a long, desolate drive from Weed to Klamath Falls, where there's probably no cell coverage, and probably not a whole lot of plowing or help if you need it. So she decided to postpone her trip. Originally we thought she could come today. But after the snow we got yesterday, that's a no-go, as well.

It started snowing at 8 a.m. and didn't stop until about 10 p.m. We got over an inch an hour. I left work early and it took me an hour to get home and I went in 4WD and about 10 mph the whole way. I don't think anyone was really ready for how much snow we actually got vs. how much was predicted. At our house, at least, we got 16 inches or so (give or take depending if you measure under a tree or in a snow drift).

I'm so glad to have a barn full of hay, a heater in the tack room, and hot water in the barn! A covered arena is nice, in theory.... 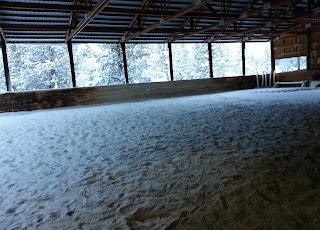 When we went out to tuck in the horses last night, I was able to top off everyone's buckets with hot water, and in addition to the extra hay in their hay nets, I gave everyone an extra loose flake - I know they needed it because all of Mac's hay was gone this morning, and he's the one who only eats what he needs and will leave extra if he doesn't need it.

Looking at Princess Fancy Pants this morning, I had to wonder exactly what she did to get her face to look like this.... 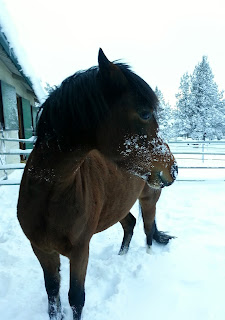 Mac was spooking at a leaf blowing on top of the snow this morning, it was pretty cute. This is him mid-day yesterday - we have so much more snow than that! 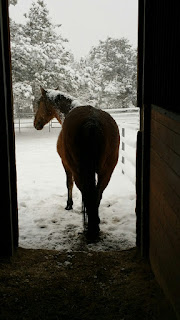 I hoofed it up the driveway to see if the street had been plowed, and it had (but our driveway has not - we're supposed to be on the guy's list, but....?). 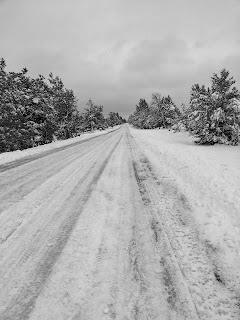 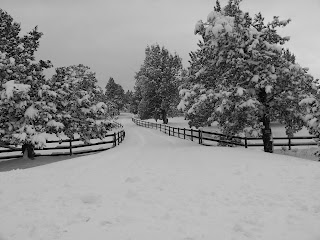 The horses are all enjoying their breakfast, with full buckets of warm water. Thank goodness there's a gate from the barn aisle to the arena that is big enough for the tractor, because I don't know that I could get the tractor out the double doors to the driveway. I could, though, drive the tractor into the arena and then dump the manure on the other side of the wall. We're now wondering how much a snow plow attachment to the tractor would cost!!!
Posted by Susan at 9:03 AM