Even though we had a successful first schooling show over the weekend, I felt like I didn't ride as well as I wanted and the feedback the judge gave was the same as Trainer gives in a lesson (I use too much rein to steer on a course, especially down a line if Pony is wiggly). So I gave myself some homework to do, which was to set up a poles/cavaletti course in the arena to practice on at home. 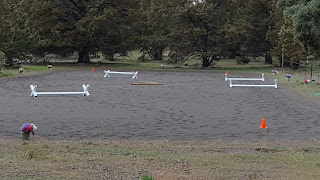 There's a line down a long side that is three canter strides, then two poles sort of where X is that are on the diagonal, one for each direction, then another two cavaletti on a diagonal that I could do singly or in a bending line. And then I can mix and match as desired.

I started out deciding to be more discreet with my aids. Pony is far enough along now that I don't need any sort of big opening rein movements, and it is distracting. So I shortened my reins and practiced warming up with focusing on little rein movements if needed. We walked around and did some circles and changes of direction and she was just as responsive with my new rein length. Good.

We moved up to a trot and got into the pole work right away. I focused on keeping my hands closer together and my reins shorter so they aren't in my lap and I'm not tempted to make grand gestures with them. It was actually really good! We did all sorts of variations of the poles - down the line (or up the line), across one pole diagonal to the other, then around the empty long side to the shorter pole diagonal, back to the line but only do one cavaletto and come at it through the middle, etc. One of the cavaletto I had up in the highest setting so we could jump it and that went very well, also. I did realize that those that I set on the shorter diagonal made for a hard turn around the corner, so I re-set them last night and swapped out the poles and the cavaletti and put the two middle cavaletti at jumping height.

By moving the jumping-height cavaletti last night to the middle of the arena, I think it will be better for actual jumping - that way I'll have a longer diagonal for preparation and landing. And then with the poles I can do a bending line. Sounds good - off to ride!