Yawn, I'm tired! Colin and I got up this morning at 4:45 to feed the horses, with the plan of being wheels-up at 6:00 a.m. to go to Pony's first "big" "away" show in mixed company (versus her first in-barn show a few weeks ago). Our morning routine went without a hitch and we got to the show grounds and parked at 6:30. I hand walked Princess Fancy Pants around the indoor and let her look at all the flowers and the judge's table before I went to tack her up for a 7:00 warm up. It was a cool, brisk morning, with frost on the ground. My feet and fingers were freezing!

We had a very uneventful warm up with just walking and trotting around the arena with new (horse) faces in the arena. We popped over a few jumps and called it. We were done by 7:20.

There was also an outdoor arena where people were warming up for the bigger classes, and then also jumps set up outside in the pasture. It was a beautiful place and setting for a show.

And then the waiting began. I forgot how much I hate this part of the h/j show world! Wait, wait, wait. Pony was very good in just hanging out while other people warmed up and while the first few classes went. She has declared a nemesis! There is a very cute small Welsh pony who is a bay with a blaze and stockings. Very flashy, very cute. As we were just walking around outside the arena, she pinned her ears at this mare and tried to lunge at her! Oh my! Pony does not want any competition in the cuteness department, that's for sure! 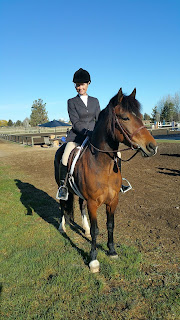 We signed up for just three classes in the "cross rails" division. One flat class and two over fences. There were probably 10 people in the division and the flat class went first. It was just a walk-trot class. Nothing exciting. I thought we did well, but the judge didn't pin us. Pony had to pee, I think, and was chomping her bit for most of the class, so I'm sure the judge didn't like that. But she went around very well and I was happy at how well-mannered she was in the group.

We went outside and Colin gave her a cookie. Then the next class began. Just a cross rails jumping class. Our goals were: straightness, rideability, breathing (for me), position (for me). The plan was to trot the course unless she landed cantering in a line and then she could canter out. Since we're working on the goals above, those came first before cantering the course (remember, we've only had four jumping lessons this year!) - that will come later.

I thought she did great! Most of the other riders were kids on ponies (I think there was maybe one other adult in the class - or at least she was an older teenager, I couldn't tell) and they cantered their courses.

Here's our first round.

And our second. She got a little playful after the first line, but that's okay - this is just for schooling!

No ribbons for Pony today, but I am so proud of her! She needs no prep. No lunging, no riding-down, no nothing. Just get on and ride.

Here's a screen shot from one of the jumps. 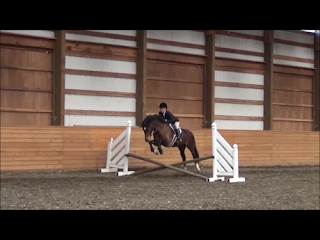