Pony and I went for our first jumping lesson of the year on Saturday. Boy was it windy! So windy, in fact, that we had our lesson indoors. This was Pony's first time in this indoor arena, but she did just fine. I got there too early, which was just fine, as we walked around as someone was having a lesson. I'm pretty good at staying out of other people's way, so when the other person was using one end, we'd use the other. When she crossed the diagonal, we'd go down the long side; if she went down the long side, we'd circle at the other end, etc. When the other person started a course of ground poles / cavaletti, we just parked ourselves in an unobtrusive spot and watched - that was actually good for Pony, as the person crossed in front of us and behind us. Pony was great.

At first while walking around, the light rays in the footing on one end of the arena were a little interesting, but she got over that pretty quickly. There was a small flower box on the ground that must have had the soul of a dead monster in it because she wouldn't walk over it - more on that later.

When it was time for our lesson to start we were ready. Since we did a lot of walk warm up on our own, we went straight to trotting and circles and poles and transitions. Then we did a small crossrail to start. That surprised her and it was a bit awkward and wiggly at first, but after a couple times it was just fine.

Next we were to do a trot pole then many strides to the dreaded flower box. NO! Pony did NOT want to go over that flower box. Trainer stood on one side of it and put a pole on the other side for sort of a "chute" and then Pony went over! Lots of praise and big pats for that. Then we came again and again at the trot and then we did it the other way. It wasn't perfect or very pretty, but we got the job done. Funny thing is we also did a vertical with an identical flower box underneath the rail and she didn't even bat an eye at it! We also did a gate, which she was great at. We put it together in a little course with a couple different variations. I need to work on not releasing so much with my body - especially since she's a pony and smaller, it could put her off balance. I also need to work on steering more with my legs. All in all it was a GREAT first lesson back and I'm so proud of her! For our last course we nailed a couple things and it was so much fun! I of course would like to drill and drill for my benefit so I can practice my own stuff; but for her we ended on a good note for what she accomplished. That's the way it must always be for a young horse. Find the good thing to finish on and leave it at that.

When we went outside I untacked her and then had to write a check and bring it to Trainer. We walked through the barn aisle to meet her on the other side and I decided I'd walk back to the trailer along the driveway, not back through the barn. Great. Another training opportunity. It is funny the things you don't even notice as a person, but when a horse brings it to your attention things change.

The driveway goes between the house and the barn. At the house there was a spinning pinwheel with lots of swirly colors on it - of course spinning as fast as it can because of the wind. At the corner of the barn was a flag pole with a big American flag flapping in the wind. Pony wanted none of either of it!

We did a couple episodes of advance and retreat. I tried to remember what Bryan Neubert would do. Take a break. Retreat. Go do something else. Give the horse a break. So we walked back to the back of the barn and stood there for a little while near the company of the other horses. Pats, deep breaths, a break. Then we went back to the driveway - a little farther down this time (but only by a few steps!). Stop. Stand. Wait. Breathe. Take it all in. Breathe. Pats. Breathe. Pats. More pats. And leave again, back to the barn area for a break. After a few minutes, we went back again and walked by the flag and spinning pinwheel and to the trailer. And when it was time to go, she didn't want to leave! But she loaded up and off we went, back home.

Turned her out in the pasture and she was a happy pony! 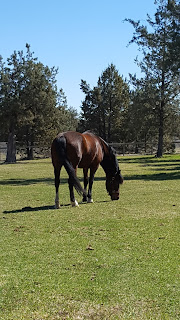